In September it burned 5,280 acres north of Los Angeles between Interstate 5 and Castaic Lake

A report produced by the managers of Southern California’s Quick Reaction Force (QRF) of four helicopters concludes that the aggressive aerial attack working with the units on the ground likely limited the final size and cost of the Route Fire. The fire started at about noon on August 31, 2022 and ultimately burned 5,280 acres north of Los Angeles between Interstate 5 and Castaic Lake. (Download the 3.2 Mb report)

The four QRF helicopters are all staffed for 24-hour coverage and equipped for night flying. With most of their base funding supplied by Southern California Edison they are located in Orange, Los Angeles, and Ventura Counties. Two of the helicopters are CH-47 Chinooks, one is an S-61, and the fourth is an S-76 used for aerial supervision. The helicopters are dispatched as a unit along with a mobile fire retardant base and can drop water until the base is established. The fact that they can drop retardant 24 hours a day, when fixed wing aircraft can’t work the fire at night, can be a game changer. During the Route Fire the mobile retardant base did not have to travel, it was set up at its base about 10 miles from the fire.

The assignment given to the QRF by Los Angeles County Fire Department on the Route fire was for it to stop the spread to the north. The S-61 was tasked to hold a particular location on the fire, using water from the adjacent Castaic Lake. It averaged of 696 gallons per drop.

The report compares the Route Fire to the 1996 Marple Fire which started in about the same location at the same time of the day and time of year in similar weather conditions. By midnight the Marple Fire had exceeded 10,000 acres and continued spreading for two or three days until it was stopped at 19,860 acres.

In contrast, the spread of the Route Fire was stopped at 8 a.m. on Day 2. The three helicopters dropped water and retardant much of the night to hold it at a ridge on the north side, allowing hand crews and dozers to complete fire line.

It is very difficult to compare the suppression costs of two fires that occurred 26 years apart, but the authors of the QRF report estimated that the cost of the Marple Fire in today’s dollars would be somewhere between $70 million and $140 million. The cost of the Route Fire was $7 million to $8 million. 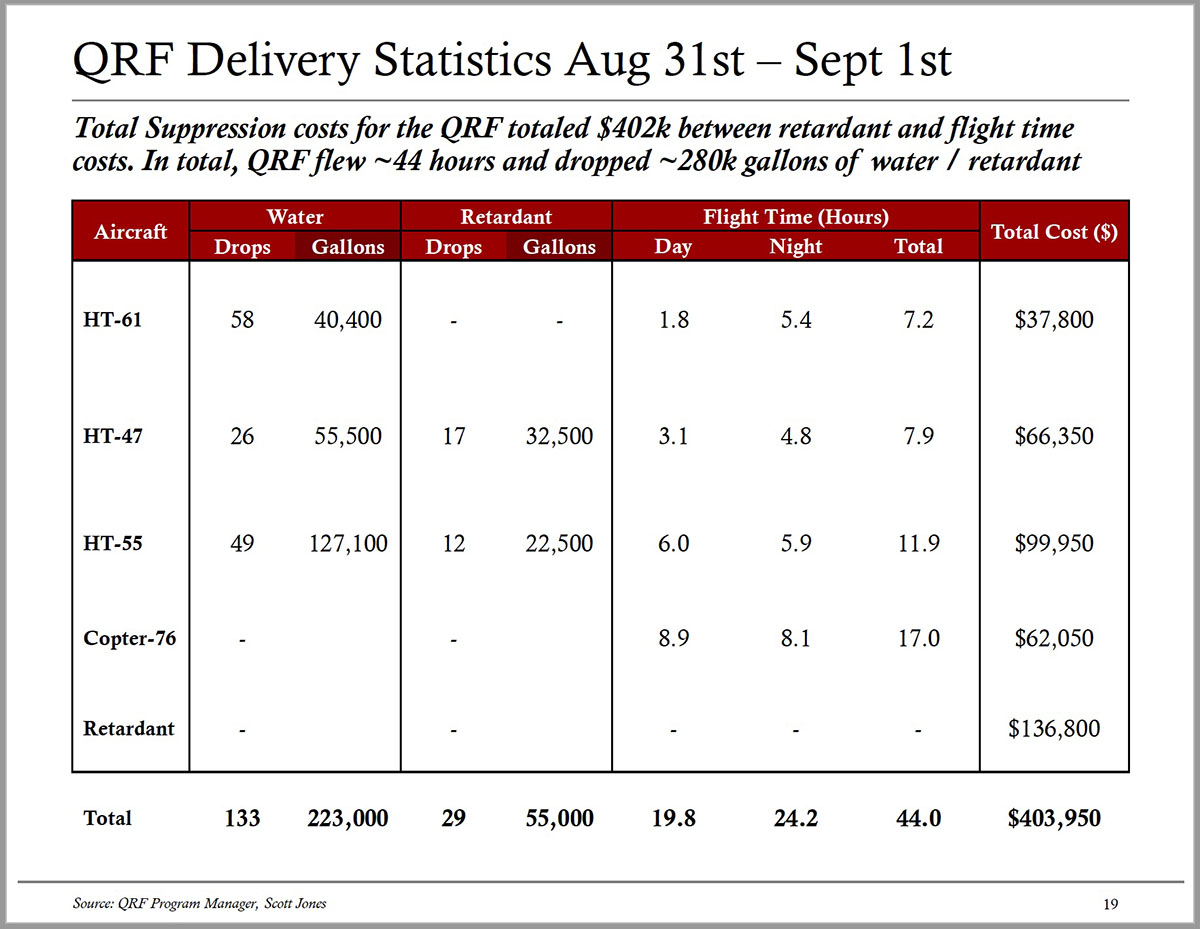