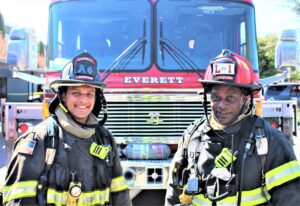 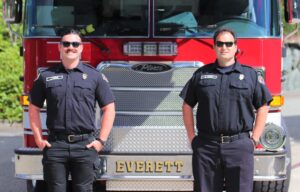 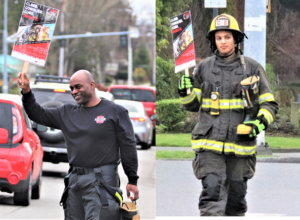 Rich and Chaz raising funds for the Firefighter Stair Climb in 2020. 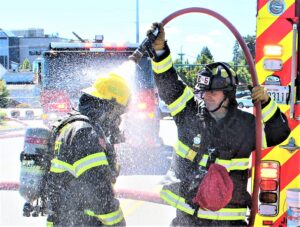 Dad Ed Ferro seems to be enjoying this moment as he hoses off son Jake after a fire last year.

It’s Father’s Day and a lot of fathers and sons will be celebrating. That includes Rich Langford and Ed Ferro with the Everett Fire Department. What sets these two fathers apart is they will not only celebrate Father’s Day with their sons but their sons are also their co-workers.

The Everett Fire Department has a long history of family members working together. In researching we found a half-dozen pairs of fathers and sons over the years as well as numerous brothers, cousins and relations.

Currently the Langfords and Ferros are the only two active fathers and sons serving together.

Rich Langford joined Everett Fire in 1996. His son Chaz joined the department in 2019. Chaz served as a firefighter with smaller departments in northwest Washington before coming to Everett.

Ed Ferro joined Everett Fire in 1991. His son Jake joined the department in 2020. Jake served as a firefighter in Spokane before coming to Everett.

Both dads told us they were incredibly proud of their sons. They also spoke about the Everett Fire Department itself. Here’s what Rich Langford had to say.

“I wasn’t surprised he wanted to be here. Everett has a fairly high call volume and a wide variety of calls. As a firefighter, you are trained in the basics of firefighting, emergency medicine and rescue. Everett Fire has a variety of specialties or special interest things to work towards after the basic training has been achieved. We have a hazardous materials team, a technical rescue team, marine team, wildland firefighters and now rescue swimmer response as well as inspectors, fire investigation, paramedics and driver/operators. Each field has a course of training and requirements to maintain the certifications. The ability to learn and eventually specialize is a strong draw to our department.”

Ed Ferro, who is getting ready to retire next year spoke of the history and tradition of the Everett Fire Department and how excited he was that his son Jake is becoming a part of that as well as making his own way.

“I’m leaving this place in great hands,” he said.

Rich Langford also told us about his family’s long history of service. His great Aunt Sarah was the first African American paramedic hired by the city of New York in the 1960’s. Chad’s mom is a retired deputy Chief of Police, Rich Langford’s daughter works for TSA, youngest sister is the Federal Chief of Probation in Alaska, two brother in laws are both correction officers and his other brother in law was Antonnio Terry. He was killed in the line of duty as a Seattle Police Officer.

Rich Langford summed up our Father’s Day conversation this way.

“Chaz is already making his own way and creating his own path. He is heading up the departments Equity Committee and helping us reach out to more people, to interest them in a career with Everett Fire. He will have a great future, because he cares about the department and the members of the department. I have seen the same drive in Jake and know he will also do great things.”