Dr. Sima Asadi and her team receive honors for their vaccination efforts. 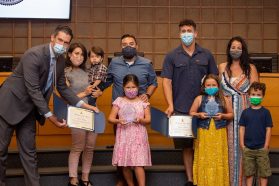 The Martinez and Albrecht families celebrate the moment. 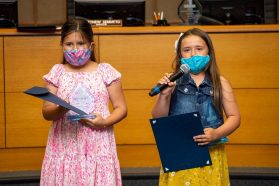 Adison Martinez and Logann Albrecht with their awards. 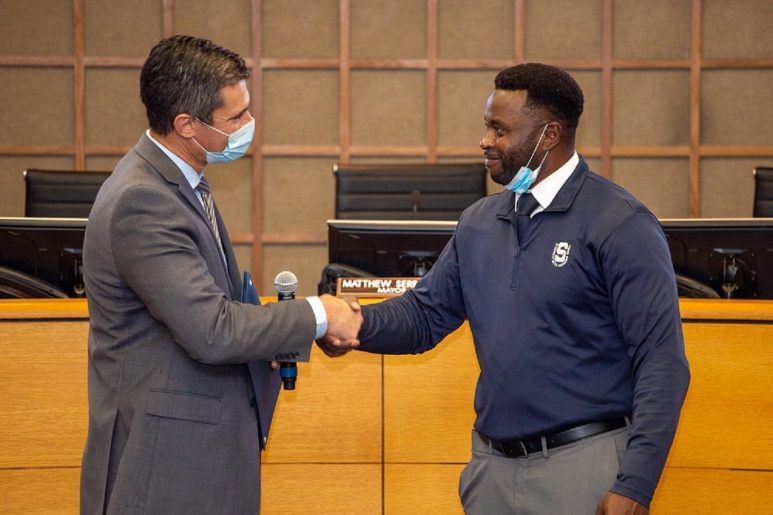 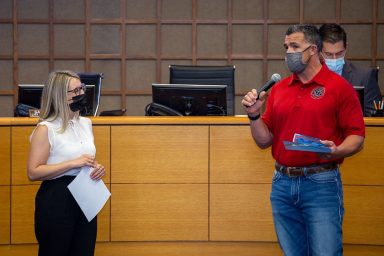 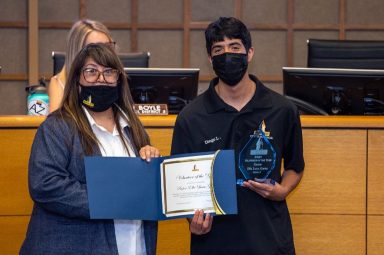 Councilwoman Bertha Perez honored Pastor Ella Luna Garza of United Methodist Church of Merced as a Volunteer of the Year. The pastor’s son, Diego, accepted the award on his mother’s behalf. 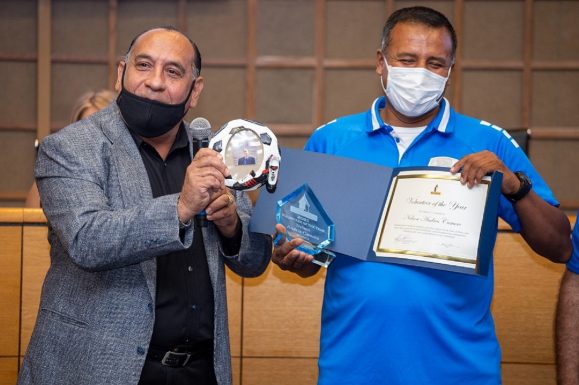 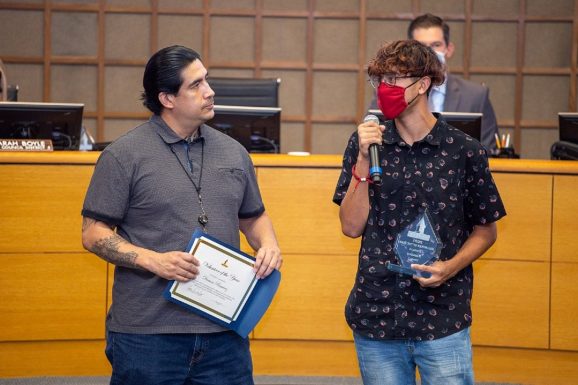 A local doctor on the vanguard of this community’s COVID-19 vaccination effort and a pair of 7-year-olds who raised thousands of dollars in donation money by selling lemonade on the street were among the Volunteers of the Year honored this week by the Merced City Council.

In all, seven awards were handed out by each member of the Council including the mayor on Monday night at the Civic Center. It was the third consecutive year the awards have been held in this fashion.

“I am forever changed,” said Dr. Sima Asadi about her journey to keep local residents safe during the pandemic.

Dr. Asadi and her so-called “Team Asadi” were honored by District 6 Councilman Delray Shelton for their work to vaccinate thousands of local residents through clinics around the region, including a massive one at City Hall in downtown Merced.

“About 15,000 doses later, my group here has accomplished more than all the Walgreens combined, all the Save Marts combined, any clinic, and on and on,” Asadi said. “I was involved myself, as an individual since the very beginning, from the very moment they called this pandemic.”

Shelton noted that Dr. Asadi — a longtime local pediatrician — spoke up early on about the dangers local children were facing due to school closures, and then “put action to her words” by becoming the first individual provider to host vaccine clinics inside her small office, and then later in small area communities such as Planada.

The grassroots effort early in 2021 steamrolled into the creation of mass vaccination clinics handled by volunteers, including a variety of nurses who were already working full time at area health care centers.

Albrecht raised nearly $4,000 in support of Child Abuse Awareness month and gave the money to Court Appointed Special Advocates (CASA) of Merced County. Her grandmother Kim has been a volunteer advocate at the organization for almost a decade.

Mayor Serratto also helped out the effort of Albrecht’s classmate Adison Martinez by giving support to her lemonade stand campaign. Martinez managed to earn over $1,000 and worked out a plan with the mayor to buy trees to enhance Rahilly Park. Later, a group gathered to plant 12 trees to be called “Adison’s Grove.” They also painted a couple park benches in need of care.

Said Mayor Serratto: “To me, the cool thing was, in this age of social media, and this age of electronics, it was just getting back to basics in the sweetest most basic thing — a little girl and a lemonade stand, and the power that has to create positive change.”

Councilman Jesse Ornales of District 1 honored 19-year-old Damon Ramirez as a Volunteer of the Year for his work as a young person involved in “youth participatory research” called the DY Project.

Ornales called Ramirez a young leader in the community who has also taken time to advocate for things like the new skatepark at McNamara Park and the Youth Voucher Program enacted by the city’s Parks and Recreation Department.

Councilman Fernando Echevarria of District 2 nominated Nelson Andres Camero for his work as a soccer coach and a mentor to thousands of young athletes in the region.

“Picking a Volunteer of the Year form District 2 was easy,” Echevarria said. “This man has spent 20 years devoted to coaching soccer and keeping a lot of our kids out of trouble and busy.”

Andres Camero also credited Fernando Aguilera of Merced who founded a major local soccer academy that has opened up opportunities for coaches and players.

Councilwoman Bertha Perez of District 3 honored Pastor Ella Luna Garza of United Methodist Church of Merced with a Volunteer of the Year Award.

The pastor was unable to attended the ceremony but her son Diego accepted the award on her behalf.

“More than anything,” Diego said, “she would like to express her love for community and desire to build up Merced. Thank you for acknowledging her effort. She is part of a much larger network with the UMC Merced that is serving this area.”

Councilman Kevin Blake gave a Volunteer of the Year award to Jermaine Paster, also known as Coach Paster, a mentoring coordinator for the nonprofit group SWAG — which stands for Students With Aspiring Goals.

Paster promotes academics, mentoring and national exposure with the goal of helping young athletes with potential to get into college.

Paster spends times at local schools and juvenile facilities to help mainstream young people in need of direction. In addition, he also volunteers at community events to clean up neighborhoods across the city. He is known to organized free food giveaways and service days at local parks, and street efforts to help homeless residents.

Councilwoman Sarah Boyle honored firefighter Matthew Van Hagen for his recent work in helping to raise a whopping $90,000 for the Leukemia and Lymphoma Society.

The fundraiser brought attention to Nolan Pedretti, the son of Gino and Michelle Pedretti, of El Nido, who is battling Acute Myeloid Leukemia.

Van Hagen is a fire captain with the Merced City Fire Department where he has worked since 2005. He is a former Firefighter of the Year.

He has donated time as a bell ringer for the Salvation Army during the holiday season, and he has served with the Make A Wish Foundation as a “wish maker.” He also volunteers at Our Lady of Mercy School as a member of the Parents Club.

According to Mayor Serratto, the Volunteer of the Year awards are a way to celebrate the best people in our community.

“I think what you find out more than anything is that people matter,” he said. “And the contributions of individuals matter. Strong communities, great communities, need great people who act and do heroic things, who step up and work, and make sacrifices without regard to their own personal benefit, but with regard to the benefit of the greater community.

“It’s been a hard year for people across the world. You see how hard times, oftentimes, bring out the worst in people. And I think we have seen a lot of that over the last year. But they also bring out the best. And this is an opportunity for heroism. And today we honor those people who, when the times were most tough this last year, they really stepped up.”