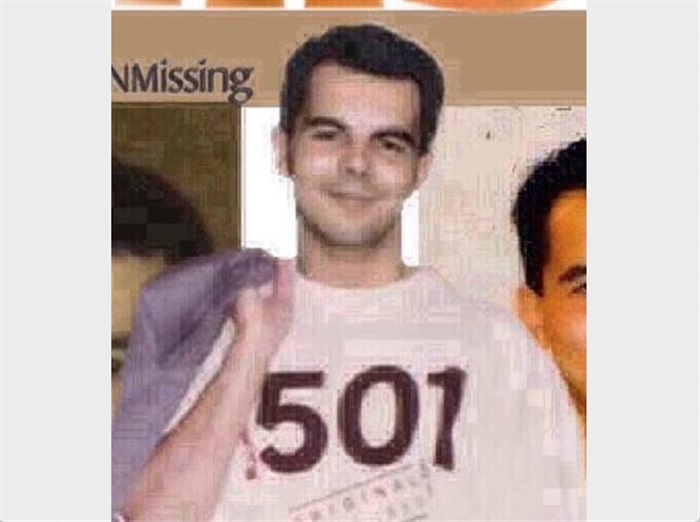 Charles Horvath was 20 years old at the time of his disappearance.

Charles Horvath Allan’s story has been told countless times since his disappearance from Kelowna 32 years ago but the ending still remains unwritten.

It’s a fact that is never far from his mother’s mind, who despite being across the globe is constantly aware of the goings-on in Kelowna and holding on to the increasingly slim hope that her son’s missing person’s case will soon be cracked.

“Was so hopeful when I read about the search by the bridge today. Never know what they may find,” Denise Horvath Allan wrote last weekend, as news of the search effort for a Kamloops firefighter made the rounds.

“(I) am so, so weary … 32 years without answers and those who know, keeping a conspiracy in silence. So cruel.”

What is clear is that her is gone. His official death certificate was granted in England last year so she could deal with his estate. That “soul destroying” conclusion, however, doesn’t change the fact she wants to know where he came to rest and who killed him.

Charles was on a gap year backpacking in Canada when he stopped in Kelowna and was last seen on May 26, 1989 cashing a cheque at the Orchard Park Royal Bank. He’d been living at the old Tiny Town campsite in a tent, and it’s there she believes the secrets to his disappearance are kept.

“A witness contacted me to say that they lived at Tiny Tent Town Campsite and RV Park at 3316 Lakeshore Rd. in the ‘90s,” Denise said, in a previous interview. “They said it was common knowledge that Charles had been killed at Tiny Town, was weighted down with cinder blocks and dumped in Okanagan Lake.”

She has no doubt that foul play was involved and can’t understand how people who might have information about his disappearance have remained silent. His belongings, camping tools, and personal property was located there and that’s why the RCMP say the disappearance was suspicious in nature.

They haven’t had any luck coming to conclusions, though. In recent years she’s had renewed hope when investigators close to home took up the case.

Leeds Beckett University in West Yorkshire launched a cold-case unit to investigate the disappearance and try to uncover new leads.

In a recent video explaining how their efforts are going, Kirsty Bennett a lecturer in Criminology, with expertise in cold case homicide reviews, missing persons, no-body murders, and major crime reviews said because Charles lived a transient lifestyle and unfortunately there was a three-month gap between when he was last seen and when his mom reported him missing, it’s a difficult case to crack.

“In that three months, people, information and evidence disappeared,” she said.

So she and six investigators have had to look at everything they could. Together, they’re operating as a major incident room, following police standard processes for cold case reviews and managing the information that’s come through.

They said they’ve found “significant leads,” though what that may amount to remains to be seen.

What’s clear is that to Horvath time is of the essence. Her son would have been 53 by now and she in turn is also feeling the effects of time.

She has said before that she’s not sure she’d make the trip to Kelowna again — a trip she’s made 16 times already — but her desire to get answers is unrelenting.

It’s something she knows people in Kelowna can help her with.

The RCMP is asking anyone with information to come forward and call Sgt. Paul Gosling of the Kelowna Serious Crime Unit at (250) 762-3300 or if they want to remain anonymous they can call Crime Stoppers 1-800-222-8477 or by leaving a tip online at www.crimestoppers.net.

To contact a reporter for this story, email Kathy Michaels or call 250-718-0428 or email the editor. You can also submit photos, videos or news tips to the newsroom and be entered to win a monthly prize draw.

We welcome your comments and opinions on our stories but play nice. We won’t censor or delete comments unless they contain off-topic statements or links, unnecessary vulgarity, false facts, spam or obviously fake profiles. If you have any concerns about what you see in comments, email the editor in the link above.