SET ABLAZE ON this day 100 years ago, the Custom House burned for a full ten days.

That was in spite of being attended by a Fire Brigade that had already been proven to be competent and well-resourced and also in spite of being surrounded on two sides by large bodies of water and on the other by perfectly efficient fire hydrants.

As we mark the centenary of the Custom House attack, much will be written about the significance of this seminal event in the Irish War of Independence.

It’s often viewed through the prism of the Civil War as the event that brought the British to the negotiating table or indeed as the event that forced the IRA to it. I will leave those arguments about the overall success or not of the operation to others. My own piece of the story looks at the role of an often overlooked but very significant player in the game – the Dublin Fire Brigade.

The Dublin Fire Brigade (DFB) of 1921 was a professional, well trained, and well equipped municipal fire service which had been founded in 1862.

At the start of the 1920s it was based in four fire stations at Buckingham Street, Dorset Street, Thomas Street and at its Tara Street HQ. Rathmines and Pembroke were each separate entities to the city and each area maintained its own fire service.

To understand the nature of the fire brigade response to the Custom House burning, it’s instructive to take a look at how it dealt with the events of the Easter Rising just five years earlier.

On 29 April 1916 following the ceasefire and surrender of rebel positions in the face of overwhelming odds, the DFB were permitted back on to the streets and faced a major conflagration in O’Connell Street, Henry Street and the surrounding area.

Within 24 hours the 45 men and officers of the Brigade, working with the assistance of 12 or 14 men from the works fire brigades in the Guinness Brewery and Powers Whiskey Distillery, had saved Jervis Street Hospital which was in the path of the flames and brought the spread of the fires under control.

The city centre was destroyed but the Brigade had prevented the spread of those fires beyond the area already burning at the time of the surrender.

One firefighter was missing however. On 24 April Fireman Joseph Connolly had left Tara Street fire station when he was told by a detachment of Irish Citizen Army troops on the way to City Hall and led by his brother Sean, that the Rising was going ahead. Joe was a member of the Irish Citizen Army and walked out of the station and joined the Rebellion, fighting through the week with the College of Surgeons garrison. After the surrender of the garrison Joe was deported to England and ended up in Frongoch prison camp in Wales with other survivors of the Rising. 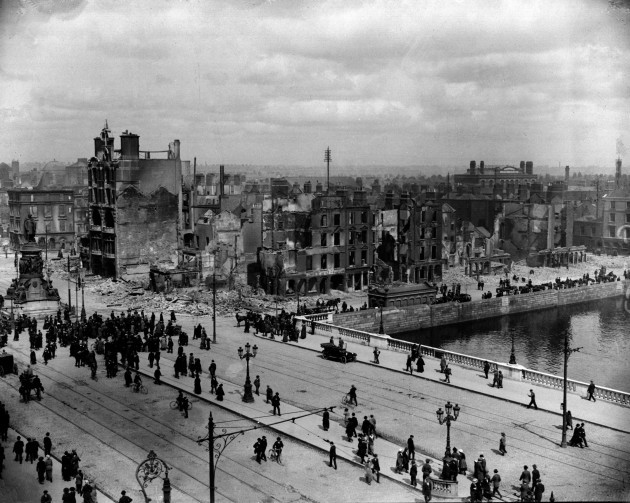 A devastated Dublin city centre after the Rising.

On his release Joe returned to Dublin, and to his job in Dublin Fire Brigade which had been held open for him.

From this point on Joe Connolly (who was, in case the thought crossed your mind, no relation to James Connolly) was the focus of a group of Republican activists and sympathisers who began to join Dublin Fire Brigade as the opportunity arose. Men like Thomas Smart, a 1916 veteran of the fighting at the Four Courts and North King Street, joined during this time as did Thomas Kavanagh, another 1916 veteran who had recently served a sentence for drilling. Another man who had served a sentence for an attack on the RIC, Austin McDonald, also joined at this period as did men like James Conway and Michael Rogers.

There was also a strong cohort of what were described as ‘active sympathisers’ within the DFB which soon allowed it to function as an intelligence and logistic asset of the IRA’s Dublin Brigade, at times moving arms and equipment around the city to IRA arms dumps or safe houses as well as being able to keep an eye out for useful intelligence among police and military who often assumed that all who wore a uniform were on the same side as them.

There was a change of leadership in the Fire Brigade in 1917 and the new Chief, John Myers, seems to have taken a sympathetic view of the Republican cause and certainly turned a blind eye at the very least to the actions of some of his men. In January 1920 he covered up the discovery of weapons in the fire at Rathmines Church where it turned out that the sacristan was also the local IRA Quartermaster. Volunteers working with DFB members removed all traces of the weapons and the incident was not mentioned in any reports on the fire.

In June 1920 the IRA launched a raid on Kingsbridge (now Heuston) Station, overpowering and disarming a military guard of 10 men and burning several railway carriages containing military supplies. When the DFB under Myers arrived at the scene he refused to order his men to deal with the fire as it was the military’s business and was linked to an ongoing labour dispute.

In the lead up to the attack on the Custom House IRA and Citizen Army members within the DFB were approached for advice on burning the building. Both Joe Connolly and Austin McDonald mention in their pension applications under the 1934 Military Service Pensions Act that they had offered advice on the technicalities of burning a large stone building. 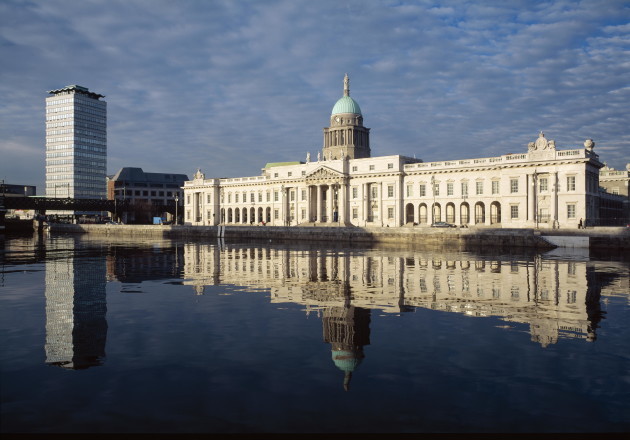 The Custom House in modern times.

The main advice offered was to use paraffin rather than petrol as the accelerant. Petrol was a relatively unknown quantity to most people in 1921 and the IRA had suffered a number of casualties, including deaths, in cases where petrol was used as the accelerant in burning disused RIC barracks and other buildings. The volatility of the substance meant that fumes could cause an explosive mix and simply blow up causing injury and death when ignited. Paraffin was a slower burning, less volatile and more familiar substance in an era of paraffin heaters and lamps. (Nine people – five Volunteers and four civilians – died as a result of the attack: you’ll find more detail on how the events played out in this piece).

Another issue was the need to hold up the fire stations to slow down the turnout to the fire when the Custom House was attacked. All six fulltime stations – the four DFB stations and the township stations at Rathmines and Ballsbridge – needed to be held for 20 to 30 minutes by a party of armed IRA men to give the fire a chance to take hold.

Writing for a reunion function in the 1950s the author of a booklet on the activities of ‘K’ Company of the IRA’s 3rd Battalion (the unit which held Tara Street fire station) thanked their intelligence officers within the DFB for their assistance with the station takeover. In the case of Tara Street friendly DFB men manning the telephones responded to calls from the police to turn out to the Custom House after the attack by telling them that the brigade was on the way and would be with them in minutes.

When a tender of Auxiliaries was finally sent to Tara Street to see what the problem was, the remaining IRA men were loaded into a DFB ambulance and driven out the front gate as the Auxies came in the rear one. They were taken outside the cordon which was forming around the area as Auxiliaries and British military set up a ring of steel.

On arrival at the Custom House the men of the DFB set to work. In a photo showing their arrival it can be clearly seen that there was a well developed fire confined to an area to the left of the main entrance but it can also be seen that there was no sign of smoke or fire elsewhere on that side of the building at that stage.

At this point the brigade was faced with a fire in a major public building which had easy access to the Liffey on one side and had both a large dock (in the area where the IFSC now stands) and a well supplied system of hydrants close by – so water supplies would not be a problem.

Along with the four DFB stations which were already responding,…