Writer/director Taylor Sheridan, started his Hollywood career as a TV actor before bursting on the scene with the screenplay for “Sicario,” in 2015, following up that impressive writing debut quickly with the equally well-received “Hell or High Water.” With that lauded pair in the can, he got the opportunity to direct his next script, “Wind River,” in 2017.

I saw “Wind River” at Sundance that year, and was mightily impressed. A murder mystery that brings together a grizzled game warden and callow FBI agent on an American Indian reservation in Wyoming, it treated the locals with respect and had a distinct sense of place, which gave it a gravitas, grounded in what felt like a reasonably realistic vision of the plains, with its political/racial tensions and complex layers of bigotry, perseverance and rough justice. It was a thinking-person’s sort of thriller, and signified — again — he was a man with a sense of vision.

Since then, however, his luster began to fade. There was a failed sequel (“Sicario: Day of the Soldado”), the recently panned Tom Clancy adaptation “Without Remorse,” and now, this lumpy thriller, “Those Who Wish Me Dead,” in which, if you pardon the analogy, cliches are piled upon cliches like so many logs on a campfire.

Speaking of fires, they figure prominently in the film, generally in the form of the raging forest variety. Set in Montana, we meet Hannah (Angelina Jolie), a local smoke jumper with a wild streak and supremely guilty conscience. The previous year, she was in charge of a blaze that blew a different direction than she had planned, contributing to the tragic death of three boys caught behind the fireline. She spends her time hanging with her all-male crew, drinking shots, and taking idiotically stupid risks off the back of a speeding pickup to assuage her guilt.

Regulated to a season spent up in a remote fire tower as a result of her trauma, she settles in unhappily, sobbing to herself while scanning the storm clouds. Meanwhile, down in Florida, a pair of hitmen, Jack (Aidan Gillen) and Patrick (Nicholas Hoult) are dispatched by nefarious government figures to take out a prominent District Attorney, and the forensic accountant who dug up some dirt on a cabal of high-powered people (the film firmly stays in the gray area of indistinct villainy, so it’s unclear if these are U.S. agents, independent contractors or something else entirely). They dispose of the former, but fail to snag the accountant, Owen (Jake Weber), and his teenage son, Connor (Finn Little), who go on the lam to Wyoming, to rendezvous with a sheriff named Ethan (Jon Bernthal), the brother of Owen’s late wife, who happens to be the local lawman in the same town in which Hannah lives.

They almost make it, but outside of town, the hitmen intercept the pair, dispatching Connor’s father, before the kid sneaks away without them noticing. In one of the film’s many, many hoary coincidences, as the boy runs along the creek trying to make it into town, he runs across Hannah outside her fire station and she takes in the traumatized lad, with the idea of getting him safe, until she can figure out what they should do next.

Meanwhile, Jack and Patrick, fed up with trying to deal with the missing boy, deliberately set a new blaze in a local park to create a distraction from the number of bodies they begin to pile up. Paying a visit to Sheriff Ethan’s place to find the kid, whom they believe he’s hiding, they instead run into the lawman’s pregnant wife, Allison (Medina Senghore), who also manages to escape them, although her husband, rushing back to the house to assist her, isn’t so lucky. With the sheriff in tow, the pair of assassins then make their way out to Hannah’s lofty fire tower, where the film mercifully blazes to an entirely predictable sort of climax.

Of all the things that go wrong here — and there are plenty of them — the most inexplicable is how generic the whole thing feels. It’s not just the villains who are vague and unformed. Sheridan’s previous work wasn’t always sterling, but it was notably singular, with memorable characters and a strong rooting in the natural world in which his milieus were set. This film plays fast and lazy with its plot mechanics (don’t get me started on the climax, set against a fast-moving blaze, which has both pro hitmen suddenly act like rank amateurs, simply to give the protagonists a chance to take them out), but worse, has no particular sense of place. Beyond a propensity toward drone shots of mountain ranges there’s no feeling of setting. Gone, too, is Sheridan’s connection to a recognizable sense of the real world, and in its place is the kind of Hollywood-dull, characterless sort of place that serves to hit the film’s plot points and little else.

I would also be remiss to not address some of the casting problems, specifically having the luminescent Jolie as a hard-drivin,’ shot-shootin’ regular gal with her fellow smokey bros. It’s not her fault, but Jolie, with her prominent runway cheekbones and swollen lips, looks oddly out of place in an everyday sort of setting, an effect not helped by her natural inclination toward setting herself at an emotional remove from the men around her.

Things do get better when she gets paired up with her young co-star, perhaps because she spends so much time with her own brood she’s able to relax that sense of aloofness. She has vastly better chemistry with Finn Little than Bernthal, or any of her adult contemporaries. It might be impossible to imagine her as a firefighter, or the kind of person who would jump off a speeding flatbed on a drunken lark, but not such a problem to imagine her as a mother figure for a wayward kid in desperate need of her fierce support. There were likely the makings of something interesting here, at one point, but most of what made Sheridan’s earlier work notable gets burned to a crisp, along with a good section of depicted forest, in this Hollywood-fueled bonfire.

Rating: R, for strong violence and language throughout

Playing theatrically and on HBO Max 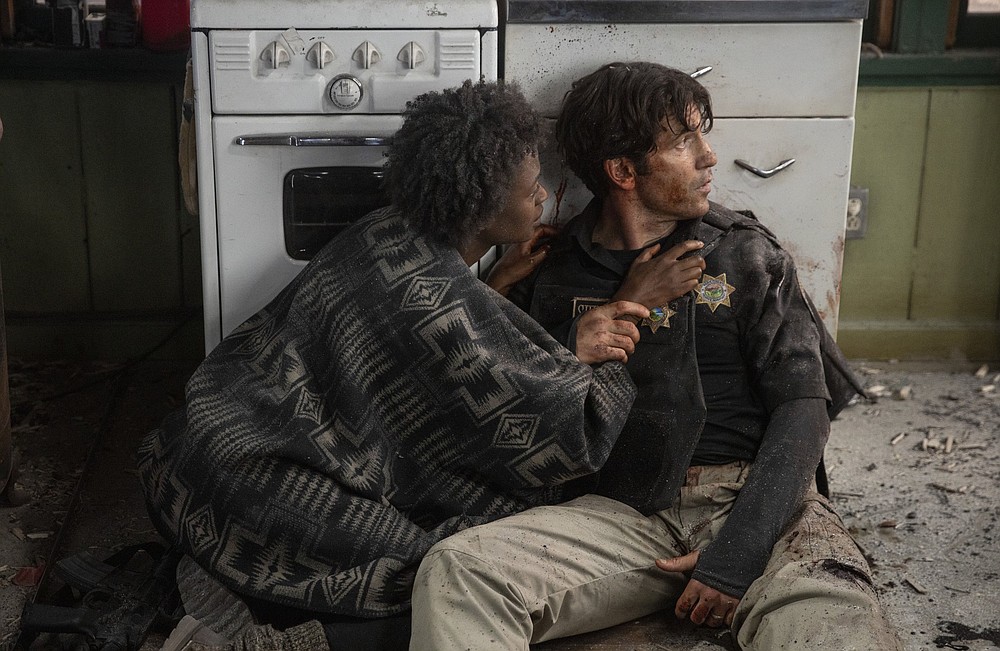 Read More:‘Those Who Wish Me Dead’