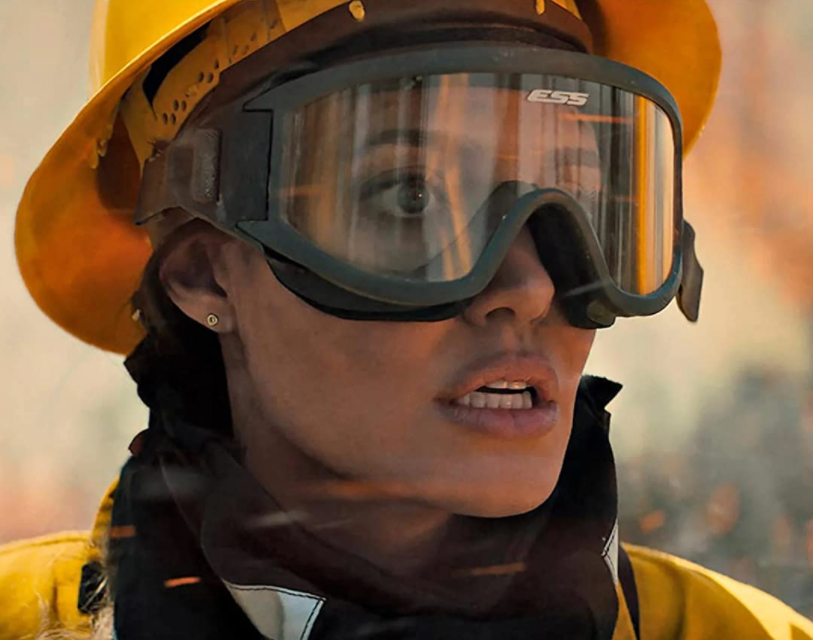 Angelina Jolie in “Those Who Wish Me Dead.”

I can’t tell you how disappointed I was with “Those Who Wish Me Dead” starring absent-from-the-screen-for-a-long-time Angelina Jolie — and directed and co-scripted by Taylor Sheridan. I can’t say much about him as a director, but as a screenwriter of the two “Sicario” films, “Hell or High Water,” “Wind River” — and TVs “Yellowstone,” he’s emerged as one of our best screenwriters. But the screenplay behind “Those Who Wish Me Dead” was not his own — sharing credit with Charles Leavitt and Michael Koryta, who wrote the book of the same name. Sheridan’s usual stamp of excellence is sorely missing.

As much as the story concept behind “Those Who Wish Me Dead” has something going for it, and carries a strong theme of crime and heroism, totally within his wheelhouse of expertise, it is sadly watered down and poorly executed…breaking down by the midpoint. It has a solid start with the murder of a district attorney who is knowledgeable of some devastatingly serious information with vast governmental connections — and a second man equally knowledgeable being hunted down before he can leak this damaging information to the public. The killing of this second man sets into motion the rest of the plot as the assailants track a lone person who escape, carrying this highly sensitive, explosive information…a 10-year-old kid.

That may be an oversimplification of the first 30-minutes, but the setup and ensuing action sets the right action-adventure tone for this child, now alone and wandering the forests of Montana, where he’ll be intercepted by a forest ranger and survival expert played by Jolie. Prior to this unlikely meeting, Jolie’s character, Hannah, a revered smokejumper and forest fire fighter, has been stricken with a PTSD condition brought on by a fire assignment that went wrong — now in recovery mode, assigned to a cushy job at a lookout tower. Her side of the story is crosscut with the incidents leading up to the two murders, the second being Connor’s (Finn Little) father while in their car trying to hide from the two assassins that tracked him to this wilderness area of the country.

Still looking ravishingly beautiful, Jolie, who has a penchant for taking action roles, doesn’t make a convincing, rugged forest firefighter. It’s just not a good fit. Being assigned to chill out in her new duty at a fire tower is hoped to give her time to expunge the guilt, grief and loss suffered in a fire incident a year ago. When Connor miraculously escapes from a massive gun assault in the car with his dad — and evades the killers into the wilderness — is just too much to take. The killers, played by Aidan Gillen and Nicholas Hoult, as father and son, are working for a powerful crime syndicate boss humorously depicted in his one scene by Tyler Perry, and have miraculously tracked down Connor’s dad making a run for it (from Ft. Lauderdale) to this remote, forested region in Montana where a relation of his works as a county sheriff (John Bernthal). His attempt is cut short when the car is ambushed in a hail of bullets, setting Connor to flee in the forest.

This is where Connor and Hannah just happen to bump into each other (in the dark no less). The two killers callously start a massive forest fire to burn out the kid while Hannah miraculously survived a lightning hit in her perch atop the tower earlier — falling to the ground only to be bruised — with the killers finally catching up with them. Meanwhile, the sheriff has been cornered as they attack his very pregnant wife (Medina Senghore) who miraculously outfoxes the professional hitmen, running and hiding, shooting her rifle at them and even climbing a ladder to the top of the tower. Meanwhile (whew!), Hannah and Connor make their way back to said tower with one of the gunmen in pursuit, all while the forest fire is blazing out of control ready to engulf them — and then “another” miraculous thing happens and Hannah and the now orphaned Connor may just be right for each other down the road.

“Those Who Wish Me Dead” is preposterously ludicrous from one miraculous thing to the next — all ridiculously implausible, rushing from one action scene to the next, missing numerous connector scenes to give more continuity to the narrative. People can’t outrun a forest fire and pregnant women, no matter how good shape they’re in, can’t climb a 200-ft. tower (at night!). As for Jolie, long absent from films (busy raising a family), actually emerges unscathed despite the kind of character she’s saddled with. The film feels like it was tampered with at the script and editing level, whittled down to a frantically-paced 100-minutes, devoid of filler material that would have made the story more believable. I’m sure Taylor Sheridan will do much better — by himself — in his next film.

“Those Who Wish Me Dead” was released at theaters on May 14.

Support local news by subscribing to the Journal & Topics in print or online.

Read More:‘Those Who Wish’ Watered Down