An April survey shows that more people want Duck to keep its guidelines for dogs on the beach in place than want it changed.

During the May 5 Duck Town Council meeting, Duck public information director Christian Legner revealed the results of a short survey on views about unleashed dogs on the beach year-round.

“This was not a scientific survey,” said Legner. “There was a request from the mayor and town manager to get a pulse of the community, so I did an off the cuff public opinion review. It was not an in depth analysis, just a request for opinions for council to gauge the atmosphere for a change or not.”

Duck currently allows unleashed dogs on the beach provided they are under the watchful eye, in close contact and under the control of their owner. However, Duck beach accesses are privately owned by individual homeowners’ associations, which means access to the beach is limited to homeowners’ group residents and guests.

Four questions helped Legner determine the respondents’ link to Duck as resident, visitor, business owner/employee and opinions on support for an ordinance review requiring dogs to be leashed Memorial Day through Labor Day. There was also an opportunity to say anything.

Legner said there were 362 against a specific change to require leashes 10 a.m. to 6 p.m. from Memorial Day to Labor Day with 354 who favored some type review. Another 181 were spread evenly between a definite no and a strong yes.

Comparing the numbers between residents of more than six months and those here less than six months, it was almost the same for both groups with close to double that do not want the ordinance to change over those in favor of a change.

Legner summarized the results saying overall there were 216 in favor of a change, 42 moderately in favor of change, 18 neutral and 428 who ultimately do not want the ordinance to change at all.

She went on to say that some open comments indicate that better education regarding Duck’s ordinance may be helpful.

During discussion, most council members leaned toward not making any changes.

While Rob Mooney said it can’t hurt to do some type of modification, Monica Thibodeau advised that any change would need a long lead time and it would be better to make no changes this year. 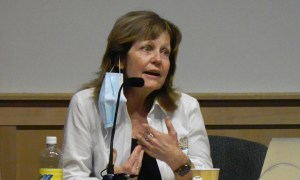 Mayor Don Kingston reminded everyone that dogs on the beach was a big issue when Duck incorporated.

“Not only are we people friendly but we are dog friendly,” he added. “I would say nine out of 10 renters come here with their dog. Sounds like consensus right now is to leave it as it is and that perhaps additional education might help.”

Earlier in the evening, Master Firefighter Brandon Boyd was recognized for completing five years with the Town of Duck.

As part of a regular recognition program at five-year intervals, Boyd was presented with a certificate and a gift certificate from a Duck business. According to Fire Chief Donna Black, Boyd started his career with Duck as a part time firefighter before signing on full time five years ago. Although one of the less verbal members in the department, Black said he could be counted on to help the department whenever called.

Other business for the evening included setting three public hearings for the June 2 Town Council meeting.

The first hearing is for a new Zoning Chapter 160D. According to Joe Heard, director of community development, the revision is a state mandated change in order to conform with July 2019 legislation. The proposed amendments are not expected to change any existing town standards but they will provide some consistency between municipal and county development regulations across the state.

Many of the recommended amendments involve the addition of definitions, changes in terminology and minor updates to existing standards and processes to comply with new state statutes.

The third public hearing is for allowing post-and-rail structures and post-and-rope structures down the eastern side of dune walkovers in the beach nourishment area. The change is aimed at allowing some type of physical support for people with limited mobility to access the beach. The proposal also requires property owners to remove any structures upon notice from the Town of Duck.

At its April 14 meeting, the Duck Planning Board gave each of the three proposed amendments a unanimous vote of approval.

The meeting ended with a closed session to discuss possible acquisition of real property for any public purpose located at 101 and 103 Scarborough Lane and property located at 1165 Duck Road.

The next scheduled meeting will Wednesday, May 19 at 1 p.m.

Read More:Duck reviews options for dogs on the beach, recognizes firefighter – The