Legislature unites in support of massive cash infusion to step up firefighting, improve forests and secure communities near the fire lines

After a devastating wildfire season that saw a baby boy die and 1,200 square miles of the state burn, Washington lawmakers are poised to fight fire with money. A lot of money.

Legislation that’s received unanimous support would see Washington spend an additional $125 million over the next two years to extinguish, prevent and live with fires. Both legislative houses have passed House Bill 1168 and Gov. Jay Inslee is expected to sign the bill, which would see the state spend $328 million on the efforts by 2027.

The push, led by Department of Natural Resources Commissioner Hilary Franz, would see the state hire 100 firefighters and replace antique firefighting equipment. A forest restoration workforce paid to make Washington’s state and some federal lands less combustible would be created almost from scratch, and communities in fire-prone areas — most of Eastern Washington — would be better protected from fire.

To its supporters, the funding represents a consequential step toward combating the fires that are consuming huge swaths of the state. Since 2015, 4,843 square miles of Washington have burned, an area the size of Connecticut that accounts for nearly 7% of Washington’s total land mass. That toll is only expected to grow as climate change shrinks snowpack and delivers hotter, longer summers.

While she stressed that it will take years to change the nature of wildfire in Washington, Franz said the funding will “change the trajectory” of the state’s fire fight.

“Relying on luck and hope during fire season has turned our wildfire problem into a crisis,” Franz said by email. “This is absolutely a turning point in our fight to protect Washington’s communities and natural resources from smoke and flames.” 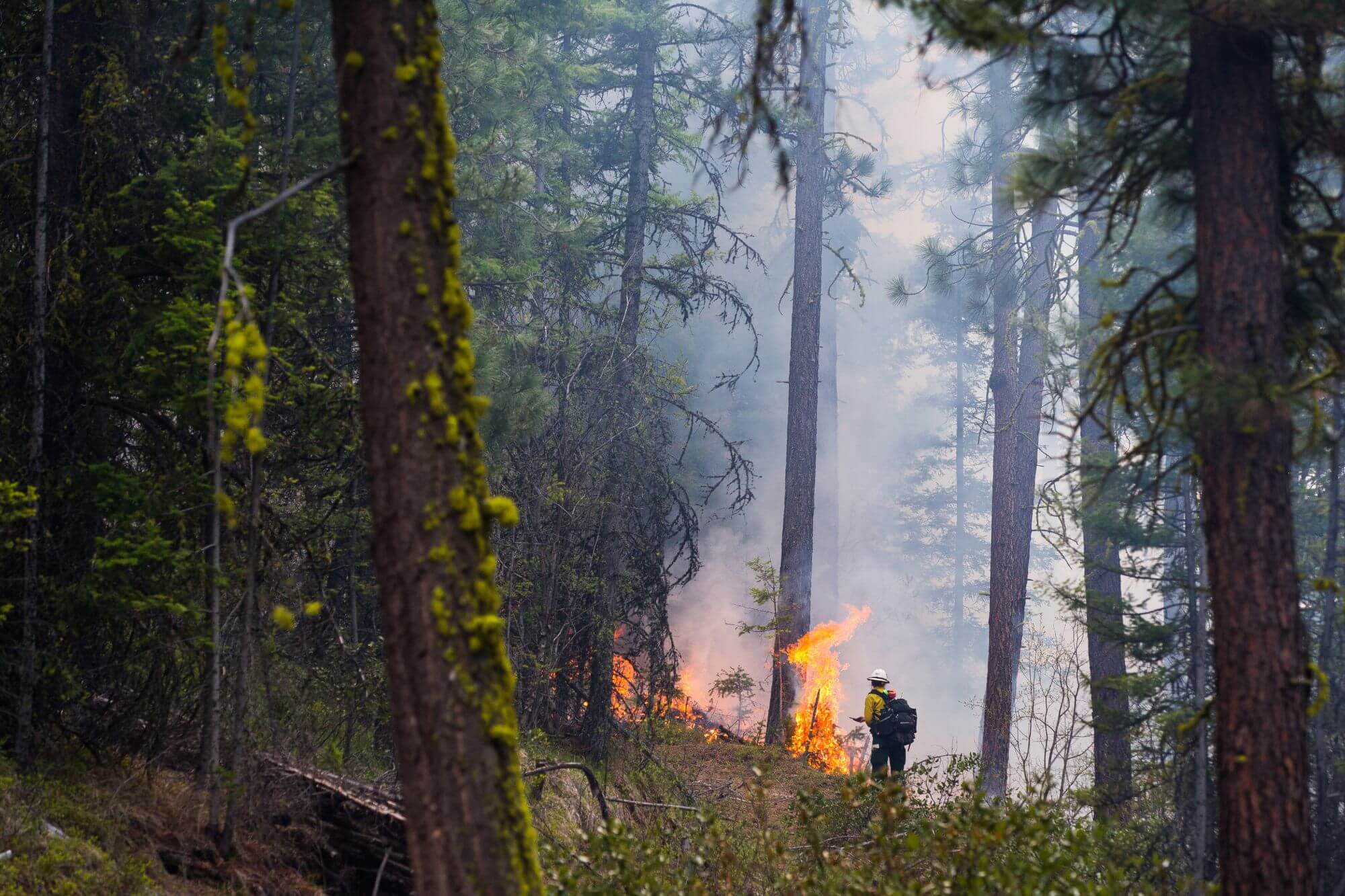 A firefighter uses an ignition tank to set underbrush on fire during a prescribed burn in Okanogan-Wenatchee National Forest near Liberty, Wash., in May, 2019. More prescribed burning and thinning of forests to promote forest health will be possible now that the Legislature reached bipartisan agreement on funding such projects. (Photo: Dan DeLong/InvestigateWest)

Washington’s fire history can be reduced to numbers and dates, figures Rep. Larry Springer recited for the House in early March. In the 1990s, about 134 square miles of the state burned on average each year. By the 2000s, that number rose to 295 square miles. During the past five years, it stood at 763 square miles.

In the statehouse, though, the story of Washington summers of flame and smoke came through in snapshots offered by senators and representatives. Front of mind were the death of one-year-old Uriel Hyland, a Renton boy killed as his parents fled a central Washington fire in August, and the destruction of Malden, a town of 300 burned in a September firestorm south of Spokane.

“When you lose the number of homes we’ve lost in a tight market, it takes a long time to replace them,” said Kretz, who joined Springer in sponsoring the bill. “We’ve still got people living in camp trailers who lost homes two years ago.”

‘Wildfire is here to stay’

Washington’s bigger burns are the result of two environmental debts coming due — climate change driven by humanity’s greenhouse gas emissions, and mismanagement of the forests and scrubland in the state. While the legislation acknowledges the former, it addresses the latter.

Following the U.S. Forest Service’s lead, land managers spent most of the 20th century extinguishing as many wildfires as they could, as fast as they could. Aggressive firefighting has left forests across the western United States primed for “megafires” like those that devoured 1,600 square miles of Washington timberland in 2015, creating an ash-gray moonscape. On the dry slopes east of the Cascades, brush, branches and dead trees that would’ve burned under natural conditions, clearing out the underbrush and some trees, are now packed too tightly for trees to stay healthy.

A 20-year plan put forward by the Department of Natural Resources estimated that about 1,950 square miles of Washington forest need intervention to be brought back to health. While much of that is managed by the U.S. Forest Service, the legislation would expand the state’s ability to help revive federal land.

Large as it is, infusion of funding won’t clear Washington’s summer skies or stop the fires from burning. But it is an important step toward limiting the human and ecological damage they cause, said Rachel Baker, forest program director for the Washington Environmental Council.

The aim isn’t to stop all fires everywhere, Baker said. A century of doing so is part of the reason Washington forests are burning so intensely now; forests, particularly those in dry climates like Eastern Washington, are healthiest when they regularly see low-intensity fires that clear the forest floor and destroy the combustible materials that fuel catastrophic blazes.

“The reality is that wildfires are going to be an ongoing challenge we face because of climate change,” Baker said. “Wildfire is here to stay.” 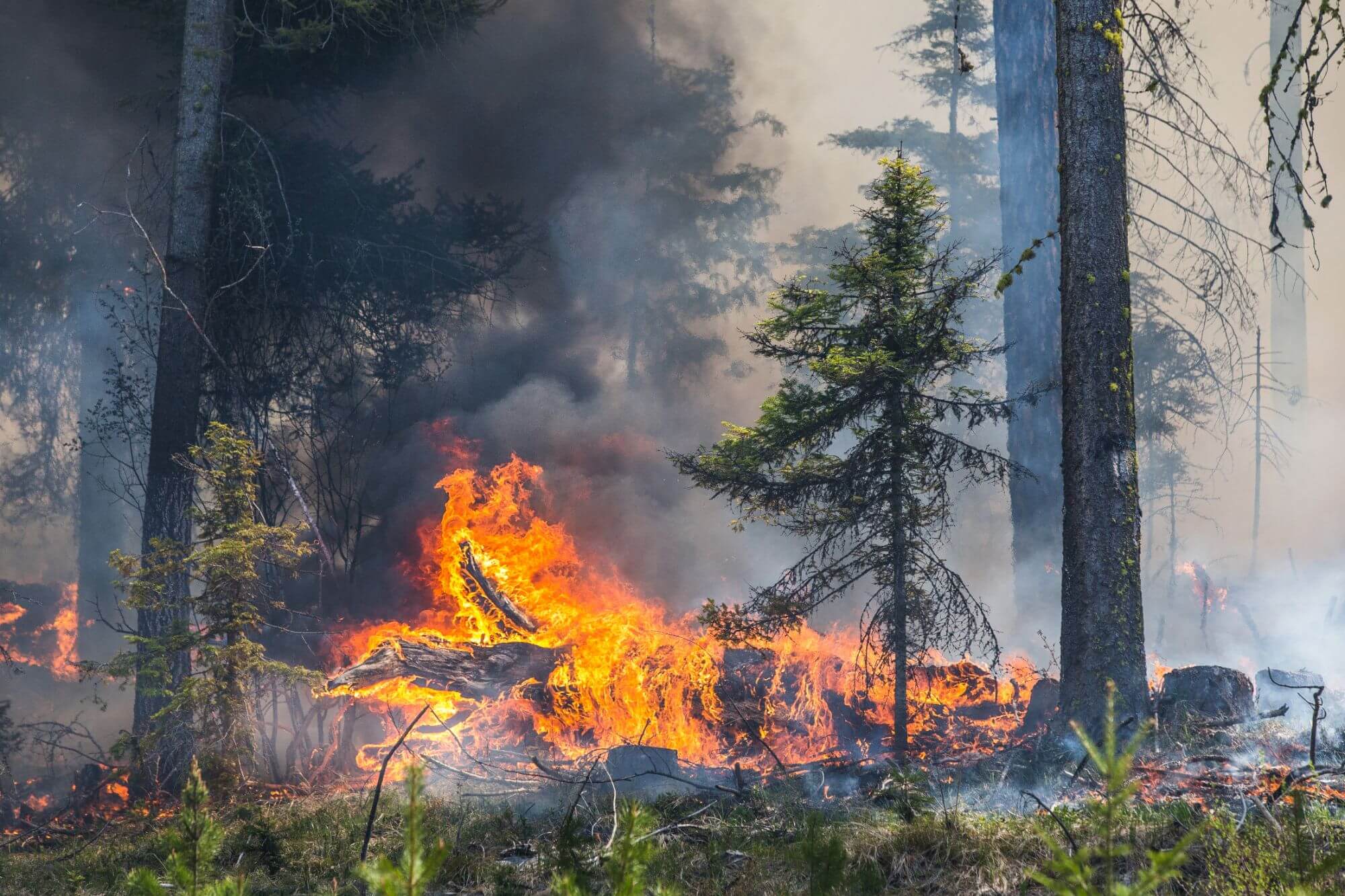 A downed tree is engulfed in flames during a prescribed burn in Okanogan-Wenatchee National Forest near Liberty, Wash., in May 2019. (Photo: Dan DeLong/InvestigateWest)

That is not to say, Baker continued, that wildfire can’t be made less damaging by fixing Washington’s forests.

Removing the excess fuel that has built up will make forests less likely to burn to ash when fire does arrive; larger trees will weather the low fires, as they had for millennia.

For decades, money meant to go to prevent fires by improving forests has been shifted by necessity to firefighting. Going forward, Washington would build up a robust workforce trained to clear underbrush and thin forests either by hand or through controlled burns, a practice used only sparingly in Washington and most western states.

While the funding hike directed toward forest restoration is only half that going to firefighting, that $17 million-a-year boost represents a dramatic shift in the state.

The legislation would enable Washington to set up programs at Washington State University and elsewhere to train a forest restoration workforce. Students would learn to remove underbrush and snags while thinning stands where trees grow too densely. Some would also be certified to use controlled fire to clear out the forests, a technique that is often more efficient and can, if conditions are correct, restore much larger swaths of forest.

At present, the forestry industry lacks trained workers to meet the demands ahead, said Jason Callahan of the Washington Forest Protection Association, a trade group representing private owners of forestland.

“If there’s no one to do the work, it won’t get done,” Callahan told the Senate Ways and Means Committee.

“Labor shortages are a real thing in the forest products industry,” he continued. “These are skilled, green jobs that pay well above the average wages in rural communities.”

Most of the money, though, will go toward firefighting, which would receive 56% of the new funding. Protection is a pressing concern, as about 951,000 homes in Washington sit near forests threatened by wildfire.

The most endangered communities lie in a swath…